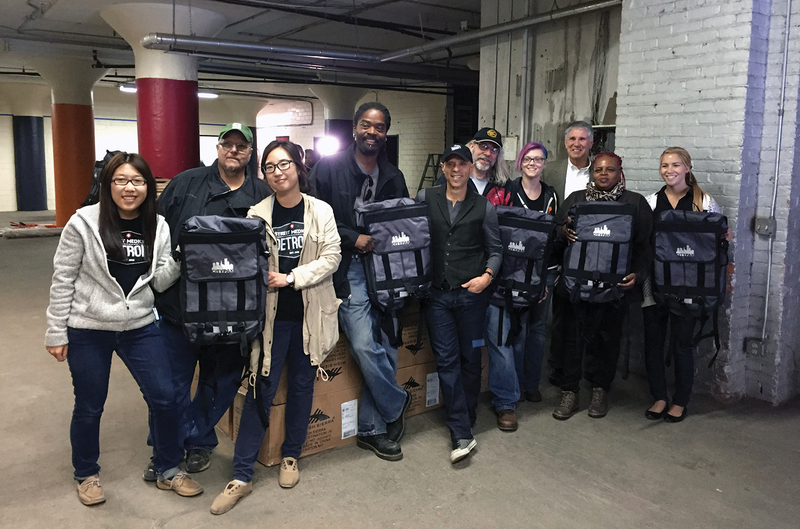 Leader Of The Pak: Paradigm Agent Ron Kaplan Delivers Custom Backpacks to the Neediest Among Us

"Four days ago, my girlfriend was intoxicated and threw all of my possessions into the ocean," said Benjamin Strauss in an Instagram testimonial for Citypak, a nonprofit that distributes durable, custom-made weather-resistant backpacks to the homeless all around the world. "Luckily my Citypak was strapped to a beach chair, and most of my stuff didn't get wet. Love the Pak."

The video was filmed by Citypak founder Ron Kaplan — an agent at Paradigm Talent Agency whose clients include Van Morrison, Roger Daltrey, the Steve Miller Band, Lyle Lovett and Joss Stone — while he was on vacation in Maui in December and spotted Strauss.

Kaplan has grown accustomed to seeing Citypaks in action far from his current home base in Los Angeles. Strauss' backpack was one of over 64,000 Citypak has distributed in 142 cities and three continents since the charity's launch in 2012.

Made of ballistic nylon, the backpacks bring security, mobility and dignity to homeless living, complete with a cinch and poncho for weather protection and loops that can attach to the owner's arm or leg to prevent theft.

Kaplan developed an interest in helping the less fortunate around 1989, when he took over his mother's namesake charity, the Selma Breskin Kaplan Foundation, after she died. "I was basically just writing checks," says the Chicago native. "I was just doing administrative work, but not actually connecting with the charities I was giving to."

Kaplan's search for a more personal connection led to a relationship with the Chicago Coalition for the Homeless (CCH). That's when the idea for Citypak took hold: "A very typical scenario was that everyday [homeless] people would come in for services, get food, recycled clothing, toiletries, but they never had anything to carry their stuff in," says Kaplan. "I thought, 'Has anyone ever devised a way to create a backpack specifically designed for the needs of the homeless?'"

Kaplan shared the idea with the owner of adventure luggage company High Sierra, who promptly put his design team on the project. After getting the first samples of the bags — inspired by the rugged knapsacks and ponchos that soldiers used in World War II — Kaplan asked CCH to help him gather a focus group of homeless Chicagoans for lunch and a chat.

As Kaplan recalls, "Everyone flipped out. They're saying, 'This is a lifesaver, this is exactly what we need!' " Members of the focus group also gave Kaplan some crucial suggestions, like adding a waterproof pouch to the bags to protect identification and hospital records. There are also no zippers on the bag's exterior, says Kaplan, where they might "get rusted or broken."

Citypak teams with local organizations to distribute the bags around the globe, and last September, it launched in Australia. At the most recent distribution in Los Angeles in December, held in conjunction with homeless youth resource center My Friends Place and Miley Cyrus' Happy Hippie Foundation, the organization gave backpacks to over 200 homeless youths.

In the future, Kaplan hopes to expand the nonprofit's reach by working with the Red Cross and the Federal Emergency Management Agency to make Citypaks part of disaster relief.

"[At] every distribution, you've done all this work scheduling and shipping, but then you're actually seeing the impact," says Kaplan. "And the impact is amazing."

This article originally appeared in the Jan. 11 issue of Billboard.